Richland County (population 320,677) is the largest county both in terms of area and population in the Central Midlands region (748 square miles). The County seat, the City of Columbia is also the State Capital, and has a population of 116,278. 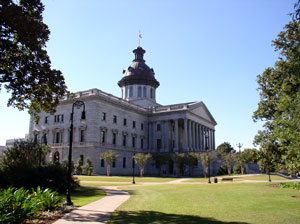 Richland County was established in 1785 and was named for its natural assets: “Rich Land”. The City of Columbia was one of the first planned cities in the US. Established in 1786, the city’s location was chosen to be a centrally-located state capital to make the government of the state easier as development moved inland, and away from the coastal settlements.

The City of Columbia is home to numerous historic buildings, many of which were restored after Columbia was burned during the Civil War. The State House, Governor’s Mansion, Trinity Cathedral, Hampton-Preston Mansion, Mann-Simons Cottage, Woodrow Wilson Boyhood Home and the Mills House, once home to Robert Mills, designer of the Washington Monument, are all notable historic structures. Amongst the cities other most notable venues are the Columbia Museum of Art, Riverbanks Zoo, University of South Carolina, Koger Center for the Arts, Township Auditorium, the Colonial Center the State Museum, and the newly opened Edventure, Children’s Museum. 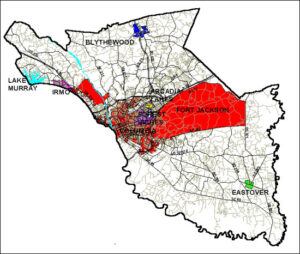 Being the State Capital, government accounts for the employment of a large portion of the labor force in Richland County. Industry is also important. Amongst the largest employers in Richland County are Blue Cross/Blue Shield, the University of South Carolina, Palmetto Health, Westinghouse, Bose Corporation, International Paper, Square D, The State Newspaper, Richtex Bricks and Intertape Polymer, all of whom employ over 400 persons. Also of note is Fort Jackson, located on the eastern edge of Columbia; one of the US Army’s primary training bases.

Despite being a large urban and commercial center, Richland County is also home to areas of outstanding natural beauty. In the southern portion of the County, the Congaree National Park, South Carolina’s first National Park, is a 15,000 acre alluvial floodplain harboring the largest major tract of virgin southern bottomland forest in the Southeastern United States. Sesquicentennial State Park and Harbison State Forest are also popular with locals enjoying the outdoors.