Fairfield County is the third largest county in terms of area in the Central Midlands region (696 square miles) and was established in 1785. It is alleged that the county name originated from a statement made by General Cornwallis when he declared “How Fair These Fields” during the British occupation of the area in 1780-81. 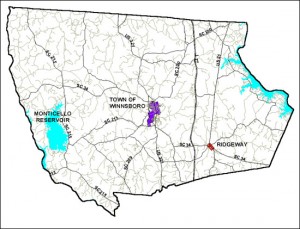 The County seat is the Town of Winnsboro, named for Revolutionary officer, Colonel Richard Winn. The Town of Winnsboro was incorporated in 1832. The most prominent architectural feature of Fairfield County is the Town Clock in Winnsboro. South Carolina’s General Assembly authorized Winnsboro’s town fathers to build a market house that “shall not be of greater width than 30 feet” to allow 30 feet of wagon travel on either side. The narrow building was modeled after Independence Hall in Philadelphia and built on the site of a duck pond. A clock was added in 1837, and the building has since been known as the Town Clock. Residents boast the clock is the longest continuously running clock in the United States.

Fairfield County is primarily a rural county with excellent opportunities for outdoor pursuits. The Sumter National Forest covers a portion of western Fairfield County and Lake Monticello and Lake Wateree, two man-made lakes provide opportunities for both fishing and recreation. Agriculture has been the primary economic activity until the early 20th century with cotton playing a considerable role in the economy of the county until the early 1920s. Mining and quarrying has also played an important role in the economy of Fairfield County. Winnsboro blue granite is mined locally and used worldwide in buildings and monuments.

Industry has been a part of Fairfield County life since a cotton mill was put into operation in the late 1800’s in the southern area of Winnsboro. The mill became a part of US Rubber Company and is now Invista Sarl. Other notable industries in Fairfield County are Plastech, Palmetto Imaging Technology, Lang Mekra, Isola USA, Maka USA, St. Gobain Technical Fabrics and Perry Ellis International. Several of these companies are located in the Walter B. Brown Industrial Park on SC 34 at I-77.